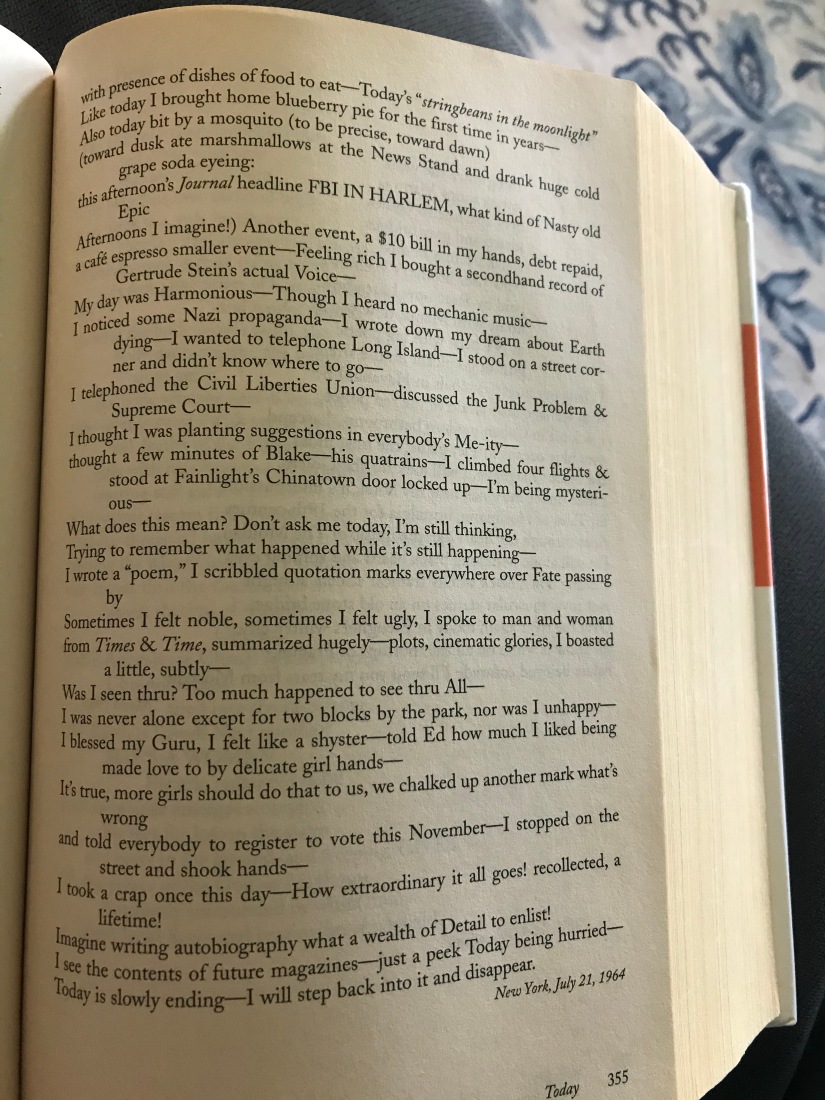 Rocking Naomi in my arms this morning, I grabbed a few moments with this poem in Allen Ginsberg’s Collected Poems.  Since reading Jack Gilbert’s “Halloween,” I’ve had not only Ginsberg’s  Collected but  The Essential Ginsberg (Michael Schumacher’s 2015 curation of the complete works, various media) come in from the library.

This last page of Ginsberg’s poem “Today” exemplifies the holististic, or inclusive, attitude toward the content of poems I think of as a foil to Mary Oliver’s proclamation: “A person wants to stand in a happy place, in a poem” (“Singapore”). Which I think implies a kind of selectivity that is indistinguishable from censorship. “Today,” on the other hand, runs the full gamut, visiting sex, defecation, etc.

It can be no accident then that Ginsberg’s Firing Line interview at once begins with a discussion of these controls. It goes on to make plain a few other things as well: Ginsberg is a major talent. His performance of “Wales Visitation” apparently at least in part recitation from memory is a formidable feat. I regard the fact of its being composed on LSD of secondary importance to the sheer magnitude of the poem itself. Many of Ginsberg’s greatest poems derive from a maximalist impulse more often indulged by novelists than poets. Run-of-the-mill poets are more committed to concision, compression, and the implied minimalism of these aesthetic principles that yield tight little bombshell poems that usually fit on a single page, now a kind of industry standard. It’s almost taken for granted nowadays that that the three or five poem submission a magazine may read is limited to three or five pages. As a result, mags that are open to longer poems usually say so in their guidelines.

Maybe my initial reservations about the quality of Ginsberg’s work derive from this prevailing aesthetic commitment to minimalism. My own poems tend to be tighter, though I got in trouble with as professor once for questioning the necessity for this. Why maximalism in Ginsberg comes out in the Firing Line interview, too: Instead of trying to “stand in a happy place,” Ginsberg is trying to follow the trajectory of his own mind. His poems provide a kind of flightpath he thought others might be able to use (I’m borrowing this notion from Schumucher’s intro to The Essential Ginsberg).

So what’s the worthier goal? Accurate representation (mimesis) or the instrumental goods of comfort, peace, or encouragement? The publisher that published my first book Fall Risk has the motto “Exceptional works to replenish the spirit.” These words place Glass Lyre Press in the mission field of the latter camp of serviceability. Another way of asking this is more classical: Truth or Beauty? I’d layer that dichotomy with another, more contemporary: left brain, right brain.

View all posts by cameronmorse